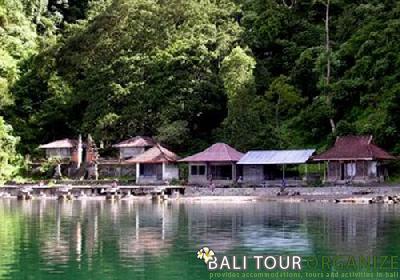 Trunyan village is an original Balinese village. Trunyan is located at the edge of the Lake Batur across Toya Bungkah village. This village can be accessed by boat in 15 minutes sailing from a small harbor at Buahan village about 4 km from Penolokan Village.

This is a Bali Aga village, inhabited by descendants of the original Balinese, the people who predate the arrival of the Hindu Majapahit kingdom in the 16th century. It is famous for the Pura Pancering Jagat temple, but unfortunately visitors are not allowed inside.

There are also a couple of traditional Bali Aga-style dwellings, and a large banyan tree, which is said to be more than 1,100 years old. At Kuban sub-village close to Trunyan is a mysterious cemetery that is separated by the lake and accessible only by boat - there is no path along the steep walls of the crater rim.

The village of Trunyan itself is situated at the edge of Batur Lake. This location is inaccessible except by boat, and it takes around half an hour across the calm waters.

Unlike the Balinese people, the people of Trunyan do not cremate or bury their dead, but just lay them out in bamboo cages to decompose, although strangely there is no stench. A macabre collection of skulls and bones lies on the stone platform and the surrounding areas.

The dead bodies don't produce bad smells because of the perfumed scents from a huge Taru Menyan tree growing nearby. Taru means 'tree' and Menyan means 'nice smell'. The name of Terunyan was also derived from these two words.